“Where’s My Roy Cohn” and “The Wedding Year” in review, after a premiere at the Calabasas Film Festival 2019

Last week, the Calabasas Film Festival marked its sixth year showing movies to enthusiastic cinephiles. Among the movies that were being showcased, one was a documentary that profiled infamous New York lawyer, one of Donald Trump’s mentors who had a significant impact in the McCarthy Era of politics, Roy Cohn. Titled “Where’s My Roy Cohn,” the documentary from Matt Tyrnauer was an eye-opening narrative into a look inside one of the coldest, callous and hardened men that was a part of America’s history.

The documentary opened by discussing Cohn’s family and his origins. Coming from a Jewish family, Cohn’s mother and father were arranged to be together. He grew up coddled by his mother and was incredibly intelligent. Cohn took and passed the bar exam at the young age of 20, but he had to wait to be admitted to law school until he was 21. It was in law school that he did everything he could to climb the ladder of success.

Cohn eventually developed close ties with J. Edgar Hoover, the first director of the FBI. It was from this connection that he was a prosecutor on the 1951 Rosenberg case. In a time filled with Red Scare strife, it was Hoover and Cohn’s ultimate goal to bring the espionage couple to “justice.” The Rosenberg case concluded with both Julius and Ethel Rosenbergs’ executions via an electric chair. The film shows how this case was the defining moment where Cohn proved to be a cutthroat lawyer who gave people the direst punishments the law could sentence. It was all in the name of true American nationalism.

As the film transitions into Cohn’s stint of being Joseph McCarthy’s chief counsel (or rather his “handmaiden,” as the film calls him), the narrative starts to delve deeper into the young adviser’s actions as to why he was so hellbent on joining McCarthy’s battle against communism during that time. With testimony after testimony, the documentary reveals that Cohn was gay, but was closeted even to his death. However, because he was a closeted gay man in the ’50s, Cohn did everything in his power to dispute these rumors. He worked with McCarthy in the mid to late ’50s during the Lavender Scare, an attempt to crack down on communists by targeting gay men that worked for the U.S. government, whilst having an attraction and a child-like crush on friend G. David Schine. During the Army-McCarthy Hearings, it was revealed that Cohn even tried to get Schine preferential treatment in the military.

In his older years, Cohn made a name for himself in the New York City nightlife. While being a lawyer, the film talks of him wanting to be adored by others as well as being a slimeball figure who talked his way out of troubling matters via social connections. As the documentary unfolds, it’s revealed that Donald Trump was Cohn’s protege after Cohn represented him in an affordable housing case in the mid ’70s. Cohn took a liking to Trump because he saw a lot of himself in the young tycoon.

In the final minutes of the film, it shows an older Cohn as a man who had lost everything because he was a source of corrupt evil that only America could create. He was a man who secretly had AIDS and tried to get special experimental treatment for it, and even in his final days denied the rumors that he was gay. The film does a great job covering an enigmatic historical figure that many may not know about. As a man who, as the documentary says, “was a personality in disarray,” Cohn was a true embodiment of “an evil that was produced partly by the darkest parts of American culture.”

In a totally different genre, “The Wedding Year” was also screened at the Calabasas Film Festival.

Robert Luketic is an Australian film director who started his career directing the cult rom-com “Legally Blonde” with a budget of $18 million. He has made a career for himself as a film director, directing movies such as “Win a Date with Tad Hamilton!”, “Monster-in-Law,” “21,” “The Ugly Truth,” “Killers” and “Paranoia.” After directing “Legally Blonde,” Luketic started directing big-budget movies, the most expensive being “Paranoia.”

Most recently in 2019, Luketic directed the low-budget independent film “The Wedding Year,” a delightful romantic comedy with a strong female lead from Sarah Hyland and a relatable story about love and multiple weddings. The film touches on major themes such as the fears and anxieties of commitment couples deal with as they plan to start their lives with each other, and the hardship they must go through to come together and unite. The film is also filled with many modern sensibilities that relate to today’s film audiences. Cringey, painful and absurd, the humor moves the story along and assists profoundly in the character development. 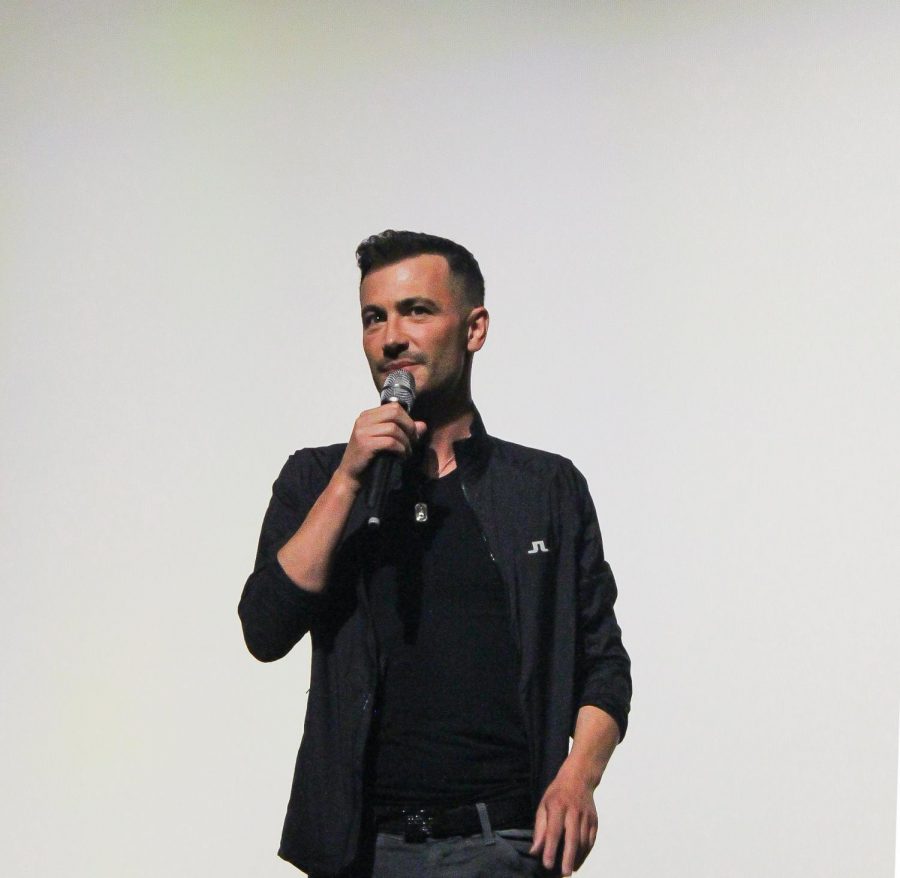 Australian Film director, Robert Luketic, engaged with the audience in a Q&A following the screening of his film ‘A Wedding Year.’ Photo credit: Natalie Fina

Following the film with a Q&A, Luketic answered what was different from directing two romantic comedies almost 20 years apart.

“The main difference was the budget being lower,” he said. Having a lower budget meant they only had two weeks of pre-production before they shot the film. Luketic described having a lower budget as “having more freedom. All of a sudden the adults are not in the room.”

Further questions at the Q&A brought up a much-heated worldwide discussion in the field of mass media, romantic comedies from studios, and whether or not the box office will survive the emergence of streaming. According to Luketic, “the romantic comedy was dead,” but with the emergence of streaming reviving all sorts of genres, filmmakers now know that viewers are watching romantic comedies and all other sorts of content. Viewers want more and more content and want it accessible to them immediately. This conversation sparked Luketic to explain his belief that the future of cinema is a crossover between streaming content and watching it in the cinema.

Even though the Calabasas Film Festival is still a newborn compared to other well-known film festivals like Tribeca, Toronto and Cannes, it gives filmmakers a way to reach their audience. Film festivals are for exposing new films to the public, whether the audience is exposed to light romantic comedy narratives like “The Wedding Year” from Luketic or being educated by the movie “Where’s My Cohn” from Tyrnauer. Whether they’re bought for distribution or not, film festivals can be a way to start a conversation in the world of cinema.

The portion of this article covering “The Wedding Year” was written by contributor Joshua McGranahan.